The history of the GIANT Costa coffee cup

In the high-street, forecourt and at motorway services, it’s fair to say that it is almost impossible to take a car journey in the UK without spotting a Costa Express Giant Cup.

A simple request from the Costa Coffee retail marketing team looking for a new and innovative permanent sign to mark their territory and raise brand awareness, has since transformed into a recognisable consumer hospitality icon and benchmark for takeaway coffee companies.

The GIANT Costa Coffee Cup was used as part of a nationwide brand relaunch as Coffee Nation changed their brand name to Costa Express, and with so many locations for activation across the UK and Ireland, they need A LOT of GIANT cups! 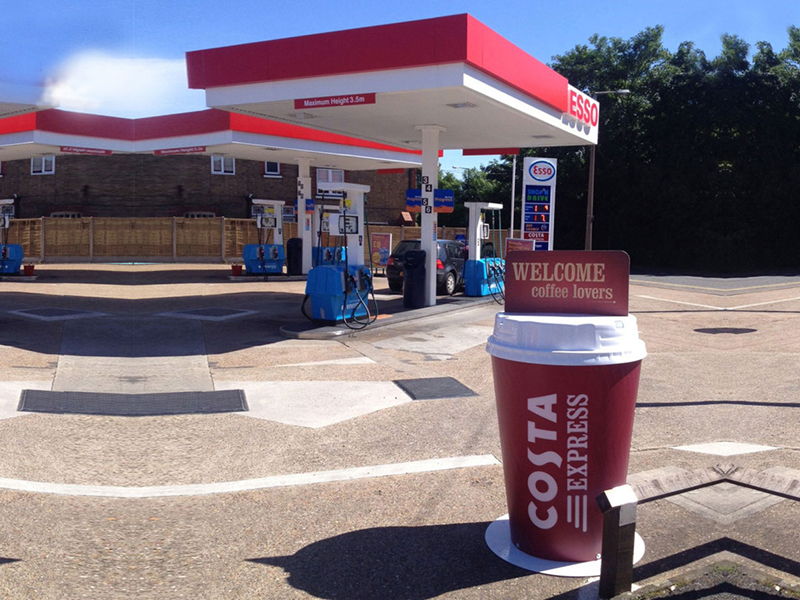 Being installed into high footfall or heavy-traffic locations, we had to ensure that each cup would withstand bumps, knocks, scrapes and the possibly of becoming a climbing frame for kids. These GIANT cups are permanent retail solutions, so what better way to test their durability than being sat on by our production team and being runover by one of our Three Point vans. No, we’re not kidding.

The Costa Express GIANT Coffee Cups were so successful, we were also asked to produce and ship to other countries around the world, including Canada & Poland!

The Legacy of the GIANT Coffee Cup

Becoming the recognisable takeaway coffee icon amongst coffee-lovers in the UK, the legacy of the GIANT Coffee Cup has spread further than the Costa Express brand alone.

Here’s some of the other GIANT Coffee Cups we’ve created….

These were the tallest coffee cups we’ve created at a whopping 2.5 metres high. They’re so big, you can even see them on Google Maps!

The Tim Horton’s brand was so fond of the GIANT coffee cup they even took it one step further and created a mascot. We love the fun behind this, bringing the GIANT cups to life.

Looking to raise awareness of their high-street location, Chapatea asked us to create a promotional GIANT cup to draw coffee-lovers inside. 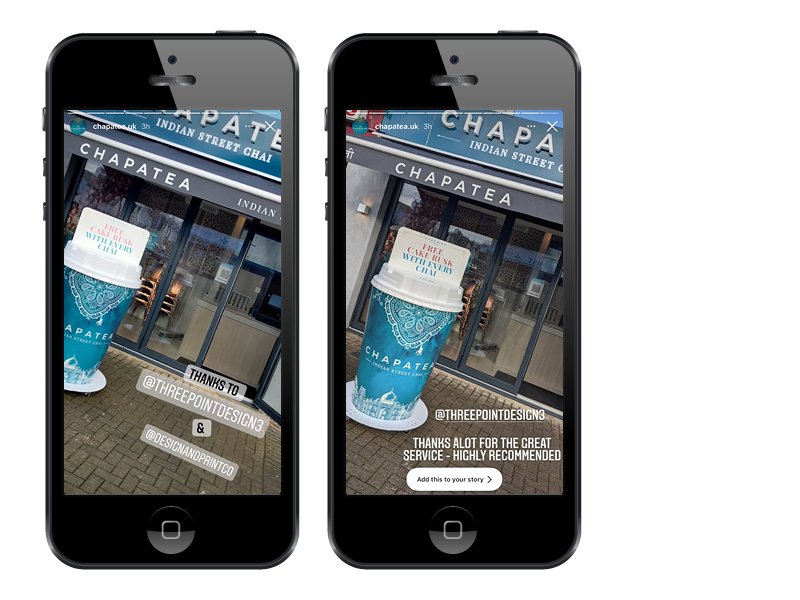 Chaiiwala asked us to create two versional on the GIANT cup that had independent purposes; one for promotional and the other as a recycling bin for customers to dispose of their takeaway cups.

Looking for your own GIANT Coffee Cup?